In fact, advertisers can bid in RTB auctions faster than your brain can process visual information—within-a-few-hundred-milliseconds fast.

Magicians, for example, exploit this shortcoming of the human brain with sleights of hand and other motions to create the visual illusions in their tricks. After magicians perform such tricks, people most commonly ask them, “How the heck did you do that?!” It’s safe to say that advertising pros reacted the same way when they saw the magic of a programmatic auction for the first time.

Before the rise of header bidding over the past couple of years, the emergence of RTB was the single most important event in the display advertising industry. RTB works like this:

Definition of RTB: RTB facilitates the buying and selling of an individual ad impression in real time via an auction mechanism and occurs in a split-second before the ad is served.

In RTB, an auction is widely regarded as a fair and transparent way for advertisers and publishers to automatically deliver the right ad to the right person at the right time, with the right price that’s mutually agreed upon by both parties. An auction is:

Definition of an auction: An auction is a process where potential bidders submit bids on a good, followed by an auctioneer who screens all of the bids and awards the good to the highest bidder.

But let’s pause for a moment. Before we go any further, it’s important to note that most, if not all, of these advancements have only affected the ad space on desktop and mobile web. In the mobile game and app space, the vast majority of advertising and publishing isn’t bought and sold in real time. Many of the leading mobile ad networks still handle end-to-end ad delivery for both advertisers and publishers, albeit not in real time. If you’re trying to make sense out of all this chaos, then you’re in the right place.

Now, magicians have an unwritten code to never explain the magic behind tricks and illusions. Fortunately for you, the Fyber Blog doesn’t follow such rules. Here, we’ll share the mechanisms of second-price auctions in RTB, why truth-telling is a dominant strategy in second-price auctions, and how header bidding is blurring the lines among auction types. What is a second-price auction?

A second-price auction is an auction where the highest bidder wins, but pays a price equal to second-highest bid.

Outcome: Advertiser C (who bid $12 CPM) would win the auction, but only pay the second-highest price of $10 (Advertiser A’s bid).

Yes, but RTB adds one wrinkle: The winning advertiser would pay the second-highest price plus a predetermined amount, in most RTB auctions that would be one cent.

Watch this video below by computer science professor Kevin Leyton-Brown from the University of British Columbia for more information on bidding in second-price auctions.

Example of a second-price auction in RTB

OK, so knowing that, let’s look at a RTB second-price auction for an ad impression offered to four advertisers. Based on their private valuations, they bid:

Note: Each advertiser’s valuation of the ad impression is private, as it relies on the direct sales or campaign budget, which is only known by advertisers themselves.

Auction winner: Advertiser C would win the auction, clearing the auction at $10.01, in other words, the second-highest bid (Advertiser A’s bid of $10 CPM) plus one cent.

What does this mean for mobile game and app advertisers and publishers? Programmatic RTB mainly employs the impression-based CPM pricing model. The same way math is considered the universal language of the world, CPM is the universal language of the RTB world. In the mobile in-app ad tech industry, cost per install (CPI) and other performance-based advertising pricing models rule the land.

“I cannot tell a lie” (in a second-price auction)

How should advertisers bid in a second-price auction?

An auction, as a mechanism for finding a market-clearing price, creates competition among advertisers. In turn, advertisers are incentivized to reveal their private valuations when placing their bids.

Definition of dominant strategy: When one strategy is better than another strategy for one bidder, irrespective of how other bidders may bid. 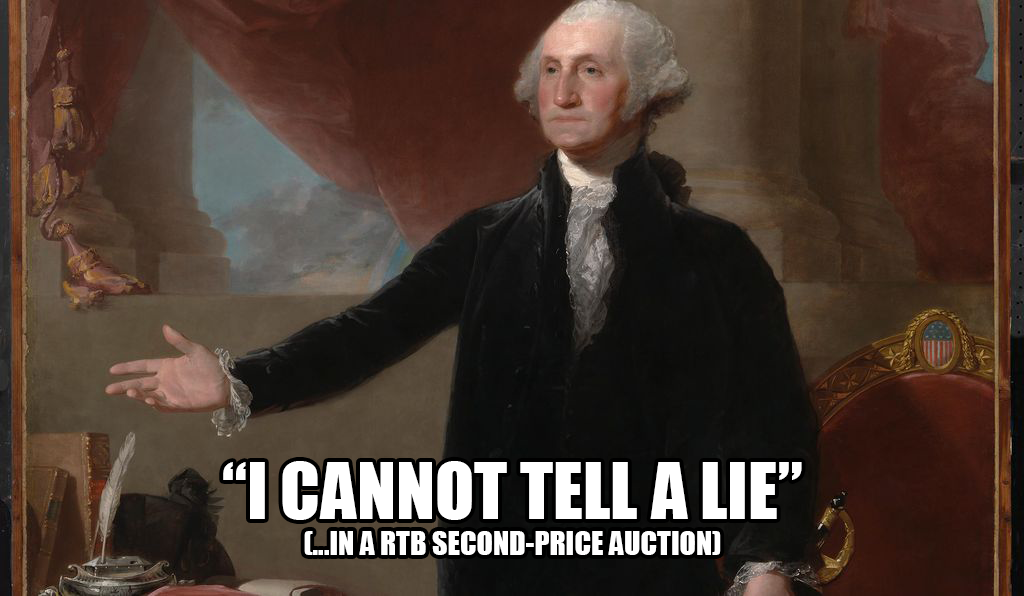 The truth-telling property derives from the traditional second-price auction and the widely adopted Vickrey-Clarke-Groves (VCG) auctions seen in search advertising, according to research published in the paper “Internet Advertising and the Generalized Second Price Auction: Selling Billions of Dollars Worth of Keywords” by associate professor of business administration Benjamin Edelman at Harvard University.

However, a truthful bidding strategy is optimal only when the budget of an ad campaign and auction volume aren’t considered, argued researchers Jun Wang, Weinan Zhang, Shuai Yuan, in their paper titled “Display Advertising with Real-Time Bidding (RTB) and Behavioural Targeting.”

But maybe I can be a little strategic

Advertisers typically join a second-price auction with a predetermined budget and run ad campaigns for a fixed amount of time, over which they participate in a huge volume of auctions. According to research published in “Competition and Yield Optimization in Ad Exchanges” by assistant professor of business Santiago Balseiro at Columbia University, truth-telling might not be a dominant strategy for advertisers in second-price auctions.

In his research paper, Balseiro argued that in repeated second-price auctions, advertisers shade their bids to account for the option value of future auction opportunities. Further, Balseiro stated that because budget constraints factor into advertisers’ decisions over time, then the auction dynamic does not reduce to a sequence of static auctions.

Definition of bid shading: Bid shading is the act of a bidder placing a bid that is below their true private valuation of what they believe a good, in this case an ad impression, is worth.

The introduction of header bidding has turned second-price auctions on its head.

This “layering” of auctions is what’s creating major headache and confusion for the digital advertising industry on desktop and web.

Header bidding isn’t all to blame, nor is the second-price model. In our next blog post, we’ll reveal that perception isn’t always reality. We’ll shed light on the contentious chatter surrounding second-price auctions in the programmatic industry, separating fact from fiction.